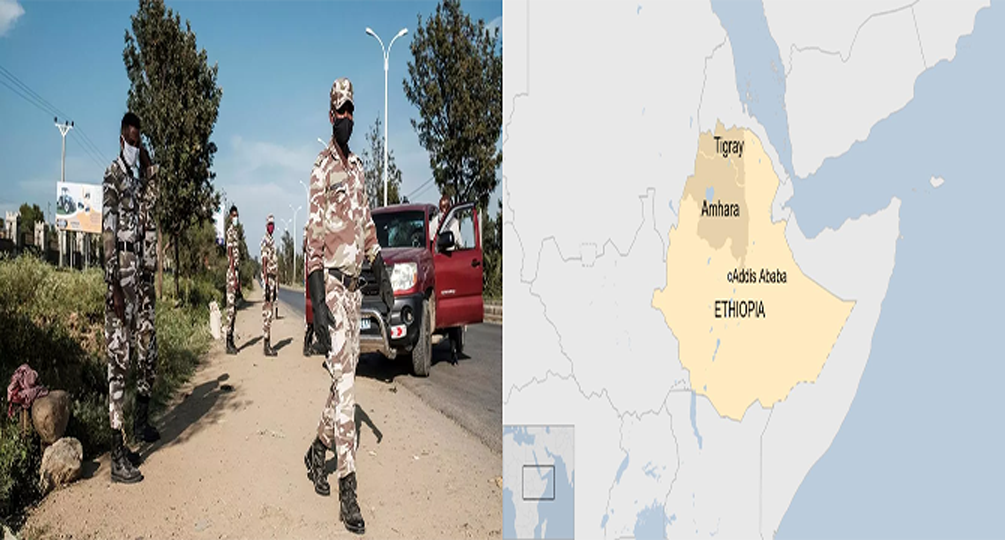 Ethiopia: The escalation in Tigray Region: a Way to Civil War

ETHIOPIA: THE ESCALATION IN TIGRAY REGION: A WAY TO CIVIL WAR

The condition in Ethiopia has mounted from bad to worse with the outbreak of open confrontation between the federal government and the autonomous Tigray region in northern Ethiopia.  On the 4th of November, 2020, Prime Minister Abiy Ahmed announced the attacks of the army bases in the Tigray region, including in Mekele the capital of the Tigray region, by Tigray People Liberation Front (TPLF) forces, the party that rules the Tigray region, and he has expressed his order of the military operations to defend itself and suppress the destabilizing plots of what he called ‘traitor’ Ethiopians. The outbreak of this conflict is only the latest developments given the enduring controversies between Abiy Ahmed’s government in Addis Ababa and the leaders of the Tigray region in Mekele, since Abiy Ahmed’s ascension to power in April 2018.
Abiy accused TPLF leaders of attacking and looting the military camps of Semen Eze (Northern Command) of the federal defense force in the region to expose the country to external enemies, an accusation denied by TPLF leaders. The external enemy in this context implicitly refers to Egypt given the heightened suspicion and heated disputes between Ethiopia and Egypt over the GERD project on Nile River in Ethiopia.
A day before the occurrence of the actual fighting, the president of Tigray region, Dr Debretsion Gebremichael, a TPLF chairperson, elected through the controversial regional election in September 2020, uttered his government’s cautiousness about the sign of military assaults from the combined forces of the federal government and external foes to down the knee of Tigray and its leadership.

The external adversary in the contexts that have been reiterated by TPLF and its leaders refers to the interference of Eritrean President Isaias Afewerki in the internal affairs of Ethiopia. Prime Minister Abiy Ahmed was awarded the 2019 Nobel Peace Prize for his efforts to end two decades of hostilities between Ethiopia and Eritrea anchored in the signing of a peace agreement between the two in 2018 under the observation of King Salman of Saudi Arabia. While the peace accord between the two has not shown any significant changes from conditions during no peacetime, for example in terms of opening the border to allow the movement of people and goods, allowing Ethiopia to use Eritrean ports (as many wished) and enabling people to people interactions in border areas, many consider Abiy Ahmed’s effort to retain peace with Eritrea was partly motivated by his intention to siege Tigray and TPLF leaders for his inevitable disputes with the later.

While ideological discrepancies and power-sharing have been the primary reasons for the skirmish between Abiy Ahmed’s government and TPLF’s leaders, the accusations of each to others of working with external actors cannot be ruled out given the complex nature of geopolitical conditions of the Horn of Africa.
On Thursday, November 2020, the Federal Parliament declared a six-month state of emergency in the Tigray region while the President of Tigray region expressed the readiness of regional forces to deter any forces that come to attack Tigray through regional television which signifies the potential of long-running escalation between the two levels of government. The federal government and Amhara regional government have sent dozens of military and paramilitary forces to the borders of Tigray regional state. Similarly, Tigray regional paramilitary forces and soldiers of Northern command approached the borders of Amhara regional state. The level of casualties has not been reported yet due to the interruption of telecommunication and internet services in the Tigray region.

To give insights on the background to this development, Ethiopia has been in the political transition that was driven by series of ethnic-based protests led by ethnic Oromo, Amhara, Sidama, Somali, and other political forces resistant to the maladministration of the regime that has ruled the country since 1991. As a result of these popular uprisings, the government adopted internal reforms anchored in the nomination of Prime Minister Abiy Ahmed on April 2, 2018. Soon after Abiy Ahmed took the PM position, he had been taking aggressive stands towards the three decades of political economy and security establishments which were in favor of TPLF due to its leading role in the fight against the Derg regime. Moreover, TPLF was the beneficiary of America’s policy of supporting the strong in the latter’s efforts to topple the Ethiopian socialist regime in the 1980s and its global war on terror campaign in the Horn of Africa for the past two decades.

The alliances among different dissent political forces, ethnic and religious grievances, and ideological groups were very short-lived and were only due to a mere common antipathy towards the government that was dominated by a minority Tigre ethnic group. After the relegation of TPLF from power, the alliances between different political forces, ethnic-based grievances, and interests turned into tensions that often manifested in the polemical narratives, massive communal violence and displacement, huge number of deaths, killing of top government officials and public figures, and demolition of religious institutions across different parts of the country. According to Abiy Ahmed’s government, all political violence and messes both at the center and in the peripheries of the country’s have been conducted by TPLF to sabotage the reforms, his government is undertaking, and destabilize the country though there has not been detailed and neutral investigations and proper legal procedures regarding the incidents.

Tensions between Abiy Ahmed and TPLF leaders have intensified when the later reiterated its ideological divergences to Abiy Ahmed’s ruling party and denied recognition to it claiming that it has finished its constitutional term, and conduct its regional election nullifying the federal government’s and electoral board’s decision to postpone all elections in the country due to coronavirus pandemic.

While the domestic political developments in Ethiopia has always entangled with regional and geopolitical contexts and external actors engagement to pursue their multidimensional interests in the broader region of the Horn of Africa, should not deescalate early, the already sparked conflict in Northern Ethiopia could evolve to larger-scale civil war and end up with state failure of African second-most populous state. Moreover, the Ethiopian crisis, if not manage sooner, would deteriorate the peace and security of the already fragile region, the horn of Africa, and will affect the stability of the strategic waterways, the Gulf of Aden and the Red Sea and hamper international trade.

The escalation of tensions and eruption of civil war would fellow by catastrophic human causalities, massive refugee, instability, and economic crisis in the region amid of covid19 spate. Moreover, the crisis of Ethiopia, the regional hub and giant of the horn of Africa, would disrupt the wider region of the horn of Africa, one of the most geostrategic locations in the world, found between two strategic waterways of the Red Sea and the Gulf of Aden.
The political developments in the countries of the Horn of African including Ethiopia have always meshed with external power competitions for geopolitical, economic, and military inﬂuence in the region. Superpower (US and China) and regional rivalries for example, between Saudi and Iran, Saudi/Emirati and Turkey/Qatar, Egypt’s aspiration to preserve its hydro hegemony over the Nile River and curtail Ethiopia’s rising regional role heightened the geopolitical tension in the region. Moreover, military engagements by many extra-regional actors including Russia, Japan, Israel, and several EU member states motivated by The Red Sea’s economic importance and security threats in the horn of Africa contribute to the militarization of the region.

This facilitates patronage and factional politics in the highly unstable region of the horn of Africa. While the competitions among external players have some economic advantages to Eastern African states in the form of investment, development aid, and rents from port and military bases, these rival states also contribute to tensions and volatilities in the horn of African states, from Ethiopia and Sudan to Somalia and Djibouti.

Etiopia’s worst and best-case scenarios rely on political commitments of domestic conflicting parties(the Federal government and Tigray regional government) and external players’ positive efforts to refrain from destabilization and factional political support and their determination to facilitate political bargaining in their interactions with local actors and their interests.

To start with optimistic estimation, the best-case scenario of the country’s upcoming future though seems unlikely is to avoid military approaches to political problems and move towards inclusive centered, balanced, and democratic politics. This can be done through the involvement of neutral third parties such as regional and continental institutions. Only political solutions of dialogue and elites bargaining could limber down the heat of identity politics in the country. Thus the third party’s engagement should be in the direction to create institutional frameworks that people could trust for their security than their membership to a certain group.

The current conditions of security dilemma in the country are caused by not only the absence of strong inclusive institutions to protect people from violence perpetrated by state security forces, presumed ethnoreligious foes, but also due to fragility of the institutions to safeguard people and ensure rule of law. In this regard, there is little hope from the domestic sphere towards genuine political bargaining given the wide divergence of political interests and less willingness to narrow down disagreements. Ironically, rather than working to find solutions to the country’s political crisis, most political forces prefer outside-in approaches, looking for external partners and assistance to win over domestic quarrels. So far the position of outsider actors, particularly the Western governments is not clear whether they will continue to rely on supporting the strong and work to support elites patron to their interest or to facilitate a genuine transition towards democracy based on the Ethiopian realities and contexts.

The Western governments have been offering Abiy Ahmed’s government financial, security, and intelligence assistance to undertake political reforms.
The worst-case scenario that could happen to the country is balkanization, territorial disintegration whereby ethnic-based competing political forces claim to create their independent states. This process will not be easy as separatist movements will fight to blood over ownerships of territory and resources and tend to exclude others which might lead to genocide and bloodsheds anchored in majority vs. minority ethnic political matrices.
Scholars agreed that contemporary local conflicts, the way they outbreak and persist are mirrors of global trends and geopolitical power competitions and dynamics of relations which indicates the issues in which the international actors are obsessed. Hence, the already deteriorated existing geopolitical trends of the horn of Africa and the domestic conditions of Ethiopia might lead the outside actors’ towards a peaceful settlement of disputes between the federal government and Tigray regional state. However, inflated expectations of outside support also might mislead the local actor’s political calculations to commence genuine political bargaining based on local realities and circumstances. Thus the directions to which the ongoing conflict in Ethiopia will tilt depends on the interplay of domestic political realities of the country, diverse external geopolitical aspirations, and the roles of third parties would like to play to address the country’s political deadlock.

Nigerien elections: between Inheritance Problems and the Dangers of Security Deviant

Political Reform in Ethiopia; From Promise to Perils